A Mech In Time 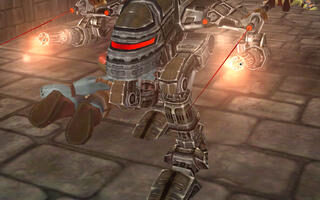 You’re a goblin-slaying mech warrior sent back in time to save your robo-mother kidnapped and held captive in the very fabric of time. It’s up to you to traverse the fourth dimension, guns blazing though obstacles, tearing your way through vicious enemies to save the motherboard whose nuts and bolts run through your mainframe.

You fight your way through levels, collecting weapon upgrades, armor and speed. Harder, better, faster, stronger is your mantra. You are a Mech In Time and it’s time to show those goblins you’ve got some heavy mettle.

The addictive nature of the game pertains to its leveling up nature as well as the difficulty and exponential increasing of speed it poses, making every tiny tilt of your device crucial to avoiding barriers, making the right turns, and lining yourself up with those pesky goblins you want to vaporize.

The game is a novel concept, aimed at the futurist geek inside ua. All Matrix, Terminator, Blade Runner, Robocop fans, head on over to the app store and start playing A Mech In Time, It’s free, and it’s bad-ass!