I arrived in London, Ontario where Slightly Social currently operates, with a mixed sense of dubious optimism, giddy trepidation and excitement. It’s not every day I uproot myself from another city to join a dynamic group of coders, artists, financial specialists and knowledgeable tech wizards. This is how I wound up here.

I first met Slightly Social CEO and co-founder Brad Mills several years ago after he had produced and shot a campy ‘80’s-homage style slasher film in Cape Breton with award winning director and sister Jacquelyn Mills. I was requested to create a sound track to the film trailer, and after impressing the siblings with my work, I was ultimately hired to write and produce the film score. This was a welcome opportunity, as at that time another potentially life and career changing opportunity had just slipped through my fingers at the last second, a roll of (eventual) positive fate that eventually had me sitting here writing this article.

I ended up getting way over my head with the feature length film, eventually providing and mixing the entire sound track, which was both stressful, yet, an invaluable learning experience. This had me develop a great rapport with Brad and Jacky.

Over the years, Brad had me providing music and sound for a collection of Facebook flash-based games, which over time evolved into more complex mobile-device games with the advent of the age of the smartphone and tablet. Brad, still working from his home office, managing his staff remotely through Skype, was dreaming of bigger things in bigger places. 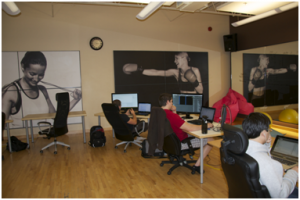 Bored and frustrated with the stale routine behind his home computer monitor, Brad was envisioning a place where his work colleagues could thrive in an inspiring, team-building environment. He set out to make this happen with immense determination, some would call folly, seeking out a perfect office where he could start laying down the foundations for his bigger aspirations down the road while building the company of his dreams.

Upon finding a vacant women’s gym and spa, a goliath of a structure, Brad inquired into renting the space and managed to land a magical deal. With the Slightly Social (SS) team already being fitness nuts and with the prospect of having such a luxurious and spacious office, they were thrilled and more motivated than ever. With multiple gyms, a dance studio, hot tub, steam room, showers, lockers and even a daycare centre, they couldn’t have asked for a more perfect spot.

After securing a seed investment on Christmas Eve of this year, SS now sets it’s sights on loftier endeavors of expansion, including adding a team of budding young interns from Western University.   The company has started developing in Unity 3D, requiring it’s C# programmers to work on challenging problems in complex cross-compatibility game engines that the company has acquired through nefarious dealings with underground mastermind members.

The key to success, according to Brad Mills is hiring the right people with great drive and self-motivation, which I have personally witnessed in my first week here at SS. The staff are very professional, yet know how to operate in an easy-going manner, which is a direct reflection of Brad, their CEO, a walking stand-up comic who never sits down and knows how to have a hell of a lot of fun while still getting the job done at the end of the day.

On my first day, I was quite taken aback by the gargantuan scale of the office-space, and that staff was playing table tennis, laughing and having a great time – but as soon as those paddles were put down, it was business as usual, and when you’re passionate about your job – that’s a hell of a lot of fun too.

Day two had me starting the day with a rigorous workout routine with the rest of the team, supplemented with a  “scrum”, going around the circle with every member of staff explaining what he had done the day before and what he was going to accomplish on that day. The simplicity of this exercise, while we exercised as a team, struck me as brilliant. Immediately we were all on the same page, even though I was shakier than a leaf in a hurricane and sweatier than a polar bear in the Sahara (do Polar bears sweat?) after our workout, I felt like I was part of something and gelling with my colleagues. Not to mention the energy and stress relief exercising gives you for the rest of the day.

Aside from my PR duties, I head the audio department, which will expand as the company expands, managing all the sound effects and music that go into each game, a far more arduous task than people give it credit for. Intern Gray Aletter, another audio nut and graduate of Fanshawe College Audio Engineering, works alongside me, a character with a comfortable attribute of levity paired with intelligence and promising composing talents. Perhaps…I wouldn’t have said this on my first day when he locked all of his computer equipment and personal items in his office, spending the next several hours going through the ceiling, reaching over with a jerry-rigged grappling hook he was trying to reach the door handle with. He eventually managed to reach the handle after a long, sweaty and messy ordeal, re-confirming my suspicions that –yes- he is actually worth keeping around here.