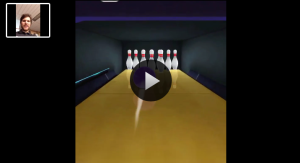 Applifier, which runs a mobile gaming networking that allows gamers to share their video playbacks, is a huge success. Apparently is it becoming a popular way for gamers to show their funny facial expressions which happen during regular mobile game play and share them socially with other players.

So far is seems to be really catching on with the percentage of videos shared increasing each month by about 25%. Fans are posting hundreds of instant funny video replays of themselves using the FaceCam feature.

How does it work?

The camera records the game being played as well as the players face simultaneously. The videos can be styled and then shared with friends on Facebook, Twitter, or Youtube.

“Game developers and players alike are embracing Everyplay for sharing and watching funny, skillful and creative replays. This drives substantial improvement in organic discovery and improved retention for games,” said Laakkonen. “We are already seeing player s who share great content become stars to follow on Everyplay and today’s release of FaceCam will further that by enabling players to share deeper, more meaningful  game experiences.”

What Games Can I find the Replay Feature?

Developers have integrated Everyplay Replays into 85 games, including Badland, Bad Piggies, Turbo Racing League, Rocka Bowling, and Nimble Quest. Video replay sharing is becoming a big feature in a variety of game platforms, and it will be built into the upcoming PlayStation 4 and Xbox One video game consoles.

You can download Rocka Bowling, a great new free mobile bowling game by Slightly Social at the Windows Phone Store! You can also find Rocka Bowling free download at the AppStore at iTunes.

“You got to play this, it’s one of the best games on iOS and THE BEST Bowling game on Mobile.”