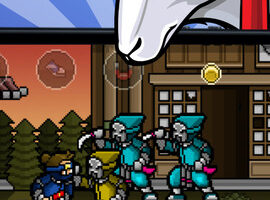 What do you get when you take screaming robotic goats (remember these hilarious videos?); a deadly robot-goat-whispering ninja and a nostalgic 8bit themed, side-scrolling themed game? You guessed it (ok, maybe not), ROBOT GOAT ATTACK for iPhone and iPad!

This recent release from emerging game developer Slightly Social has our ninja protagonist, armed with his trusty katana slashing his way through evil ninja enemies, set to the backdrop of a delightfully aesthetic 8bit Japanese landscape.

The pace is fast, the original music hypnotizing and the goats…well the screaming goats are hilarious. Our hero, also armed with the ability of inexplicable Dr. Dolittle-esque goat charming ability, also mounts the goats (I apologize for that image), rather, he rides goats within the game…ok let’s just say he gets on the goats’ backs and gallops across levels slaying his enemies, clearly inflicting terror and shock with every approach, because let’s get real, what would you do if a violent goat-riding ninja came at you with a sword?

Collect as many coins as you can and power up through the levels. Go for multiple strikes on enemies and ride the heck out of those goats!

If like myself you pine for the beautiful days of 8bit glory (I didn’t plan on playing this for long but somehow two hours dwindled away in a gluttonous ingestion of pure nostalgia) or are just looking for an addictive, hilarious game, download Robot Goat Attack NOW. It’s free and it’s baahhd ass!