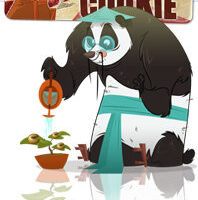 We’ve been developing the casual fortune cookie themed Facebook game for the past 9 months with a group of 20 or so closed beta testers, and now we’re ready to let more would-be cookie warriors into the world of Handan.

The whole development team is very excited to get some more feedback and fresh input from fresh faces.  For most of the guys, this will be their first Facebook application! Even though the game is not 100% ready yet, we’re going to launch into Open Beta, partly so we can shake the rust off!

The team as a whole need to get our collective feet wet – we’ve had a To Do list a mile long since Day 1, so before this turns into Duke Nukem Forever, we are going to take the plunge!

Also, from a managing standpoint, there’s nothing better to motivate an all night code-a-thon than 10,000 fans begging for an update!

Developing a complicated Social game on Facebook is hard enough, but when all of your developers work from home, things can get slightly more challenging.

Over the last 9 months while we’ve been working on Kung Fu Cookie, we’ve primarily used Skype to communicate, Basecamp & Dropbox to organize the project, and Pizza to motivate.

It’s been a learning experience for all of us, in fact we are now facing a very frustrating issue that requires some creative thinking to overcome. Unfortunately, this sort of thing comes with the territory of developing on the Facebook Platform.

We developed a streamlined Character Select & Tutorial, which is very complex on the backend, but has been formatted to give people an awesome first impression of Kung Fu Cookie. It is also designed to walk them through the basics of playing the game in an easy to follow & entertaining way.

It took us at least a month to develop this system alone!

Recently we’ve discovered that this bridge is about as stable as a tight rope, and it seems to be guarded by nasty mean Trolls that prevent us from using the bridge when we need to. Thanks to the Facebook FBJS Bridge Trolls, players are getting eaten before they even make it through the Tutorial!

When this happens, they get frustrated with the errors, don’t know what to do, and just leave! We’re at the whim of Facebook here, and there’s nothing we can do to fix the FBJS errors, we just have to wait until Facebook fixes it.

Obviously that’s not a solution that we can afford to accept, sometimes it’s 2 weeks before Facebook gets around to fixing an issue like this, and that kind of intermittent downtime could devastate a growing game.

So we’ve devised a plan to retool the entire Introduction, Character Select & Tutorial to make it all flash. Doing this will delay our official launch by at least a week, but it’s the only option.

As long as we are learning lessons from issues like these, Slightly Social is coming out one step ahead, a stronger Company.

We look forward to the day when we can remove the Beta tag and turn on the traffic, but until then, we will keep taking steps…maybe the Facebook Development Kit  should come a pedometer.